I've always wanted a large prime lens (300mm f/2.8 or 400/500mm f/4) but, sadly, have never been able to afford one; for starters brand new copies of the latest ones cost as much as my car and the secondhand VR ones command hefty prices as well. I was in town this morning and as I passed the local camera shop I had my customary glance in the window. Normally the shop hasn't got anything I'm interested in (I usually have to go to Southampton for that, or browse the fabulous MPB Photographic) but I always look anyway and today I saw a Nikon 300mm f/2.8 AF-S for sale. I went in, tried it out, found myself handing over my credit card when I shouldn't have and left the shop with an old, well-used-but-perfectly-functional 300mm f/2.8. 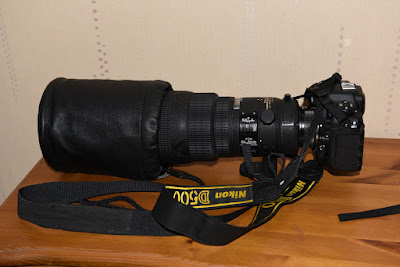 As it's about 4 iterations ago, it's an AF-S (I) and has no VR, it's hard to handhold (more so on my D500 which is an APS-C) but I'll try it on a tripod at some point and see what I get. So far I've aimed it at the cat, dog, bird feeders (never a bird to be seen when you need one) and the Moon.

I'm looking forward to trying it out properly and, hopefully, it will do until I can afford a VR version. It's a bit cosmetically shabby but the AF motor, optics and aperture mechanism all seem in good shape. These old primes were built to last - a feeling I don't get with my 200-500 as, despite that being a great lens, the build quality is plasticky - so, although this one is at least 16 years old, I hope it will last me for a while. The AF motor is the only thing that would concern me as I don't think Nikon makes the parts for these any more, but if the worst happens, I'd just have to use manual focus.
at Saturday, November 25, 2017 No comments:

Recently there have been a number of aircraft types making their last appearances for their airlines and, more dramatically, airlines going bust, most notably Air Berlin and Monarch.

Air Berlin called it a day at the end of October, as they found themselves in increasing financial difficulties. Their long haul flights ceased before the short haul ones did and by the end of October 2017 they had become part of history

Monarch's demise was rather more dramatic. Whereas there was notice that Air Berlin were going to pack it in, Monarch suddenly ceased trading - although the writing had been on the wall since their flirtation with bankruptcy in 2016 - causing the UK Government Civil Aviation Authority to charter aircraft to repatriate people back to the UK after their holidays.

KLM Royal Dutch Airlines retired their Fokkers at the end of October as well. Not as dramatic as an airline going out of business but still a sad occasion.

United Airlines are retiring their 747s, the last United 747 departed Heathrow only a few days ago and the plane which operated that flight is already in the desert.
N104UA, seen here at Narita in March, was retired in July 2017.

It's especially sad to see the big 4-engined jets like the 747 and A340 vanishing from the skies, seen off by costs and more efficient twin engined jets such as the 777 and A350, but at least the 747 will live on as a freighter for many more years. The 747 flew commercially for the first time a few days before I was born and some of its 'descendants' will probably still be flying when I am old. Old aircraft are replaced by new and there'll always be interesting stuff to photograph and travel on for many years to come.
at Wednesday, November 01, 2017 No comments: